History of the breed:

Originally Japanese dogs were small or medium sized, large breeds were not noticed. Since 1603 medium sized dogs named Akita Matagi were used for bear hunting as well as for dog fights in the district Akita. Since 1868 Matagi were interbred with Tosa Inu and Mastiffs, as a result breed's sizes increased, but the features of Shpitz type disappeared.
In 1908 the dog fights were prohibited, but nevertheless the breed was preserved and improved, and became a breed of Japanese large dogs. As a result in 1931, nine prominent representatives of the breed were called "Natural Monuments".
During the Second World War (1939 - 1945) dog's coat was often used for military garments. By order of police all dogs were captured and seized, only German Shepherds were used for military purposes. Some dog owners tried to circumvent the order by cross-breeding their dogs with German Shepherd.
By the end of World War II, the number of Akita decreased dramatically. In addition, there appeared three distinct in breed types: Matagi Akita, fighting Akitas and Shepherd Akitas. As a result, the breed development was very complex and confusing.
During the recovery of the livestock of the purebred Akita after the war ended, short-term, though considerable popularity has received the male from Dewa line, named Kongo-go. Mastiff and German Shepherd influence was traced in his exterior as well. Nevertheless, reasonable and educated breed fans didn't consider him a type of genuine Japanese breed, that's why they exerted all efforts to eliminate the influence of foreign breeds and to restore the original pure bred by mating with Matagi Akita. They managed to get a stable stock of large Japanese dog breed just in the same type, as they are known today.


Click on the picture to see our Leather Pulling Dog Harness 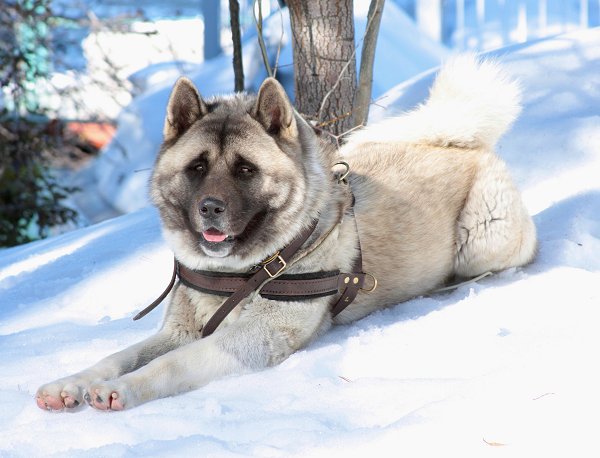 Country of origin:
Japan
General appearance:
A large dog of strong and powerful build, with well balanced nature. Secondary sex characters are strongly pronounced. The dog has a noble appearance, modesty and self-respect.
Height and weight:
Height at withers: males - 25 - 27 inches (64 - 70 cm); females - 23 - 25 inches (59 - 64 cm).
The average weight is 88 - 110 lbs (40 - 50 kg).
Format:
Moderately long. Index of lengthiness: 110-111.
Coat:
Coat is hard and straight, undercoat is soft and thick. Hair is somewhat longer on the withers, sacrum and tail in comparison to the other part of body.
Color:
Any color except black. Possible colors include white, brindle, spotted, piebald - with or without mask (white dogs don't have mask), or with the blaze on the snout. The colors are pure and bright, spots are clear, evenly distributed. Spotted representatives have evenly arranged spots covering head and more than one-third of the body. Undercoat may vary in color from the coat.
Head:
Massive, but matching the body in the shape of a blunt wedge. When the dog is calm the skin is wrinkle-free. The skull is flat and wide. Forehead is slightly convex, divided in the middle with the shallow furrow. The stop is well pronounced but not abrupt. The snout is wide, strong and has a great depth. The ratio of snout length to the skull length is two to three. The nose is wide and black, Akita of white color has  liver nose, but preferably black.
Ears:
They are small in comparison with head. Ears are pricked on strong cartilages. Stretched forward ear should reach the upper edge of the eyelid. The ears are triangular, slightly rounded on the ends, wide at the base. The ears are set on wide, but not too low, at the level of withers, slightly tilted forward over the eyes.
Eyes:
Eyes are small, deep-set, moderately situated and have triangular shape and brown color, but walnut color is allowed as well. Eyelids are black and adjoin closely.
Neck:
Thick and muscular, without dewlap and is proportional to the head.
Teeth:
The lips are thick and tight, of black color. The tongue is pink. The jaws are square, powerful and strong. Teeth are large, white, complete. Bite is of scissors type.
Body:
Withers are pronounced, dry, goes in a straight line back. The blade-bones are strong, powerful and sloping. The back is straight, wide, strong and muscular. The loin is strong and muscular, slightly reached. The croup is wide, muscular and slightly sunken.
Chest:
Broad, deep and large. The depth of chest equals half of the height at the withers. The ribs are well rounded.
Abdomen:
Well tucked up.
Tail:
Big and thick and high-set. The base of the tail is strong. The tail is carried over back or side and curled to three quarter of the one or double curl. The end of the tail falls down far enough to one side. Tail bone reaches hock when let down.. The hair on the tail is coarse, straight and thick.
The limbs (front and rear):
Forelimbs have massive bone structure and straight. Elbows have a backward direction and are close to the body, directly set under the withers. The forearms are straight and vertical. The pasterns are strong. The paws are are cat type, oval, with thick pads, pointed straight ahead.
Hind limbs are muscular and have massive bone structure. The thighs are thick and sturdy. Moderately-angulated stifle. Metatarsi are low and parallel to each other.
Attractive features:
Akita Inu has is a truly oriental nature - sometimes totally calm, balanced, and a moment later - active. Very self-reliant, independent, proud, but faithful. Akita has a majestic, noble appearance and character, full of dignity and certain mystique. Hunting dog In the past, Akita at the right time gets out of its usual passive state, mobilizes all power and protects its owner. It combines power and obedience. Akita will not disturb with causeless barking - it will prate only for a serious reason, because it is very reasonable.
Our company offers you a wide range of accessories (products) for dogs. Below you will find different products, like collars, muzzles, and harnesses fitting Akita, as well as wide range of equipment for Akita training.
Displaying 1 to 14 (of 14 products)

Your cart is empty. 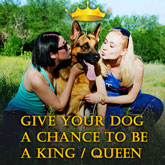 This is my second harness and I am even more pleased with...

Dear Natasha, I wanted to let you know that the harness...